“I was on my usual butterfly photography outing today when I encountered this rather friendly Scaly-breasted Munia (Lonchura punctulata). It allowed me to get up to about a foot or even closer to it. All the while it was feeding on grass seeds. Very odd, though, as these munias always give me a wide berth whenever I am around that location. Is it injured?

“But when I got up after shooting it, and made a bit of noise, it took off with a few ‘chirps’ to the trees.

“This was taken with the D3 and a Tamron 180mm macro lens! And for at least a couple of the shots, I was really at macro distance! One of those times when a macro lens can be used to shoot a bird close up.”

Recently fledged juvenile birds usually allow us to approach closer than adults before they fly off. They have yet to learn to be aware of us humans. However, Sin Khoon pointed out that there are no tail feathers in his photograph (above). In this case it is possible that the munia could be a recently released captive made for religious credits. But then Vesak Day was not around then…

Check HERE for other tail-less munias found during Vesak day. 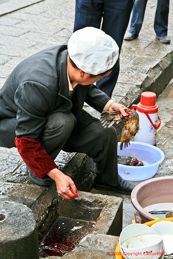 In many Asian countries, exotic wildlife attracts, not to view but to feast. Many eat...