“Upon receiving a tip-off from a bird forum, I rushed down to capture a few shots of this rare winter visitor and passage migrant, the Malayan Night Heron (Gorsachius melanolophus). The heron is globally near-threatened.

“The heron stayed close to a bush and was a far distance away. I spent about an hour and a half observing it before it started feeding on something from the ground. It picked up a large earthworm, pulling it from the ground. It was a struggle to swallow the wriggling earthworm, taking about 15 minutes before succeeding.

“The heron then became lethargic and retreated behind some thick bushes.” 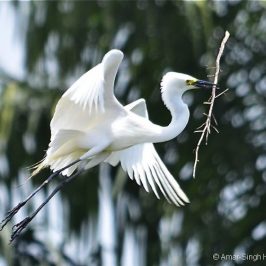