Choo Teik Ju was at Singapore’s Sungei Buloh Wetland Reserve in early November 2009 when he encountered a family of Milky Storks (Mycteria cinerea). One of the parents caught this fish, which was trapped in the mud during water release, and threw it over to this juvenile (below left). The fish looks like the Brown Sweetlips, also known as Hotlips (Plectorhinchus gibbosus), recognised from the dark grey-brown body and swollen lips. The two adults (below right) are sunning the inner surfaces of their wings. A total of four Milky Storks were spotted, two adults and two juveniles. These storks have been sighted in Singapore during the last few years, mainly in the Sungei Buloh Wetland Reserve. Their status here is debatable – either vagrant or escapee. However, it is known that they were introduced by the Mandai Zoo as free-flying birds since 1987, now breeding freely there. 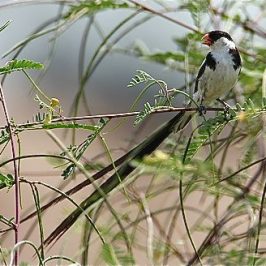