According to our fish consultant, Kelvin KP Lim from the Raffles Museum of Biodiversity Research, National University of Singapore, the puffer “looks like a juvenile Green-spotted Puffer (Tetraodon nigroviridis), a common species in the mangroves of Singapore and Peninsular Malaysia.”

Pufferfish is so-called because it inflates by gulping water into the stomach when handled. This prevents predators from swallowing it. Swelling also occurs in air when the fish is removed from the water, making a croaking sound as it sucks in air. Once the fish is thrown back into the water, it deflates. Many pufferfish are poisonous. The fugu that is eaten in Japan as a delicacy that only highly trained chefs are licensed to prepare, is the most poisonous of the puffers. It has a deadly nerve poison that is more than a thousand times deadlier that cyanide. However, not all puffers are poisonous. And if poisonous, the amount of poison depends on the geographical location and the season. Again, the puffer’s neurotoxin is not necessarily as toxic to other animals as it is to humans. After all, puffers are routinely eaten by some species of fish.

It has been reported that the Green-spotted Puffer, a popular aquarium fish, uses the toxin as a defense mechanism against other predatory fish, stunning those that bite it. However, whether it is poisonous to the kingfisher needs further observations.

For skeptics who may claim that the kingfisher was only ‘playing’ with the puffer, the above images show that the bird actually swallowed it. Ha, but did it vomit the puffer later? There were no further observations after the bird swallowed the puffer. But if there were, I am sure there would be an image showing the kingfisher casting a pellet of the indigestible parts. 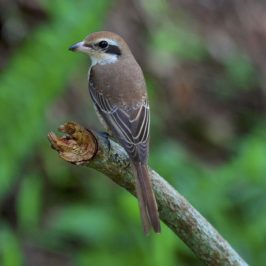 Johnny Wee’s images of a Brown Shrike (Lanius cristatus) caching a frog was documented at...