The fruits of the common mahang (Macaranga bancana), a smallish tree growing in Ipoh’s Kledang-Sayong Forest Reserve in the Malaysian state of Perak, attracts four species of sunbirds. This was documented by Dato’ Dr Amar-Singh HSS on 21st and 24th October 2009 when he observed them making many feeding forays, and at times hovering in the air to pick off the seeds. The Purple-naped sunbird (Hypogramma hypogrammicum nuchale), as with other pecies, takes nectar, insects and fruits. However, it has been reported that this species takes fruits in Borneo, not Peninsular Malaysia. Smythies (1999) records it taking fruits of Poikilospermum (Family Urticaceae), a scrambler that starts life as an epiphyte. Wells (2007) reports it taking small succulent berries and arillate seeds in Borneo, but not in Peninsular Malaysia. The current report of a pair of Purple-naped Sunbirds taking fruits of Macarange bancana (Family Euphorbiaceae) is apparently a first record (above left, male). (See also OBI database from Sabah HERE).

There was also a pair of Plain Sunbirds (Anthreptes simplex) repeatedly feeding on the fruits over a period of an hour and a half of observation, a male and a female (above right). Wells (2007) reports it taking arils of Acacia magnum seeds in Peninsular Malaysia and the fruits of Poikilospermum suaveolens in Borneo.

Red-throated Sunbirds (Anthreptes rhodolaemus) were similarly feeding on the fruits. This is a rare species. “Never seen it at this forest reserve before but delighted that it exists. Saw the female on the first day and the male on the second. Very hard to capture good images as they spent most of the time high up and are very shy,” says Amar. Wells (2007) reports it taking figs and Macarange sp. fruits. 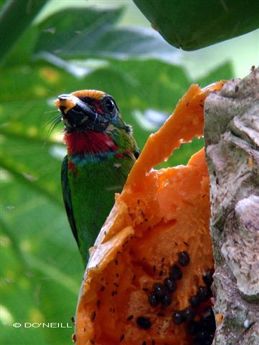 Following an earlier post on the Gold-whiskered Barbet (Megalaima chrysopogon) feeding on a papaya, Daisy... 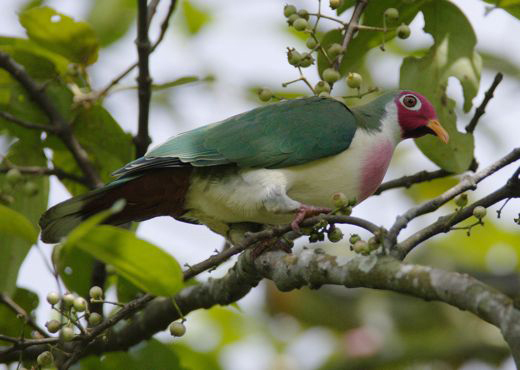 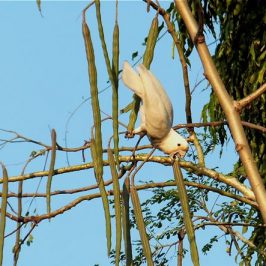