Adrian Lim’s a.k.a wmw998 image of the Tawny Frogmouth (Podargus strigoides) was taken in Australia. After all, the bird is endemic to that continent.

The frogmouth’s distinctive feature is its wide, strong bill, thus its common name, frogmouth. The bird takes large insects, centipedes, millipedes, scorpions, spiders, crustaceans, frogs, lizards, rodents, birds and small mammals. It has been known that some frogmouth crush their prey or bash them up against the perch until the bones are crushed before swallowing them.

The prominent feature, besides the mouth, are the well developed facial bristles. However, these are less prominent in the Tawny Frogmouth then in other species. The function of these bristles is not known. The longer bristles in other species may assist in directing prey into the mouth. Or they may have a tactile function.

Tony Tham’s video clip was documented at Singapore’s Venus Loop. It shows a pair of... 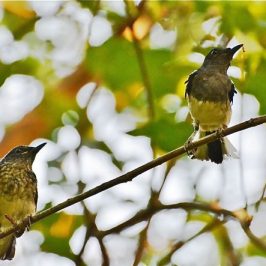 “So far, the anting behaviour that I have observed have been confined to the Javan...