Desmond Wong a.k.a. des95446 reported an Emerald Dove (Chalcophaps indica) crashing into a glass pane at his aunt’s house in Janda Baik, Pahang, Malaysia. The impact caused a loud sound that attracted attention. The bird simply rested as seen in the image on the left the entire night, not moving much. The next morning it glided down the slope to the grass patch below, stretching our its wings.

John Vickerman commented: “This bird certainly looks as if it has come off second best in a wrestling match! The fact that it survived the night sounds good news. It was probably winded and a bit bruised by the impact, and almost certainly traumatised by the event. A night’s rest would have helped it. More serious internal organ damage would almost surely have led to its demise overnight. Hopefully, after a controlled glide down the slope (at which time any broken wing would have become visibly apparent), it was able to feed and drink and remain clear of ground predators to allow it to regain full strength again.”

Birds regularly crash into large glass panes as seen in our earlier posts under the category “glass, reflection.” 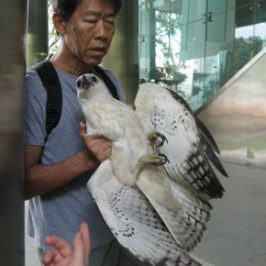 “It was up in Fraser’s Hill< Malaysia that I again witness this unusual behaviour of...