“In August 2009, at a coastal village near Mersing, Johor, Malaysia, my friends and I had the opportunity of observing the interaction between a pair of Oriental Pied Hornbills (Anthracoceros albirostris).

“In the first image (above left), the male is the larger bird perched higher up on the branch and the other smaller one with more markings on both the bill and the casque is the female.

“At first, nothing unusual happened – the pair was just flying from tree to tree, branch to branch with the male calling frequently. The male then seemed to be coughing (above right) and out of its bill appeared what seemed to be a stick or a tree branch (below left). This happened within seconds and we were quite far away. The strangeness of what happened didn’t quite hit me as I refused to move my eye from the eye-piece of the camera. I continued to observe what was happening, trying to capture as many shots as possible for later review. “Then the female joined the male on the same branch and the ‘coughing’ spasm happened again. The female moved even closer to the male and the pair seemed to lock bills (above right). Hey, the female in fact seemed to be putting her whole head into the male’s throat (below). A few shots later, it looked as if the female was strangling the male with her bill. “The male didn’t seem to mind and the strange behaviour of bill locking with the female sticking its whole head into the male’s throat continued for a few more seconds.

“A previous posting showed two males in a possible play of dominance. Another post showed courtship behaviour where the pair interlocked their bills and indulged in courtship feeding.

“But was that really a stick that the male threw up? It seemed to be too stiff and straight to be anything else but a stick. Also, is there an explanation for the ‘strangulation’ encounter? Were all these part of a courtship ritual? Or just play? It was a very strange but exciting interaction to have observed.

“Any comments, explanations, etc. are welcome.” 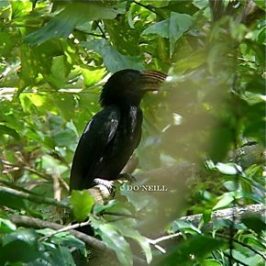 “In late April 2008, a revisit to North Sulawesi concluded to be one of the...