“The above adult male Black-throated Sunbird (Aethopyga saturata wrayi) is the mate of the female posted earlier. This is possibly the friendliest sunbird I have ever come across – he allowed naked eye viewing at 1 meter. He had finished feeding for the evening on nectar from an orange Hibiscus rosa-sinensis and was just resting. I had a good look and so did he. If only the lighting was reversed but cannot complain when we get such precious moments. “The friendly adult female on the left allowed me to watch her feeding on the nectar of Fuchsia flowers as noted previously by Loke Wan Tho (Quoted in David R Wells. The birds of the Thai-Malay Peninsular, Volume 2). She was diligent to visit all the flowers (all varieties of Fuchsia) and pierced the base of the tubular corolla. She is the mate of the male in the top image.

“The Black-throated Sunbird is a well-known nectar feeder. The adult female has to resort to robbing nectar from the flowers of fushsia (Fuchsia hybrida) rather than probing from the top. This is because the sunbird is not adapted for such flowers, fuchsias being not native plants but introduced ornamentals. It is the same with the hibiscus, as the male would have similarly short circuited nectar collection by probing at the base of the flower. By doing so, both birds would not have assisted in pollinating these flowers.

Note: The images of the Black-throated Sunbirds were taken at Gunung Brinchang, Cameron Highlands, Malaysia at an altitude of 1,700m ASL. 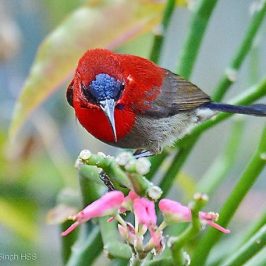 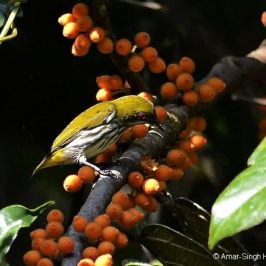