Earlier, KC Tsang queried why only juvenile Tiger Shrike were seen in Singapore. This post got R Subaraj responding, saying that this is not so…

“It is not true that adult Tiger Shrikes do not reach Singapore! We do observe a few adults each winter. However, there are far more juveniles than adu,ts.

“Many adults tend to either arrive early in the season or fly stright through. We also encounter adults in spring, when they are on their way back. It is also possible that adults take up winter territories further north while juveniles are forced to migrate further….but this needs to be proven.

“There definitely seem to be more adult Brown Shrikes than Tigers each year.

“There are also far more immature or female Yellow-rumped and Mugimaki Flycatchers and Siberian Blue Robins each year than adult males! Many male Blue Robins do migrate through early.”

When sent the image by Teik Ju, KC responded, ”No not fully adult yet … still having that brown tinge on it’s forehead of a juvenile …”

According to Gll (2007), many species of birds undertake what is known as differential migration. What this means is that sexes and age classes of fully migratory species move different distances. Typically, females migrate farther than males and juveniles migrate further than adults. It is possible that males need to return to their breeding grounds early to claim their territories. But why juveniles fly furthest? 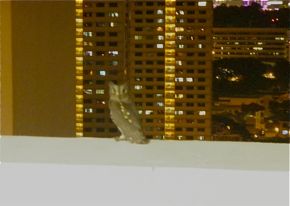