“There’s a new nesting on campus – this time I believe it is the House Swift (Apus affinis).

“During the last week of Aug 2009, while I was at an open stairwell, I observed a relatively large black bird flying in from the open and ‘hitting’ itself against a far end corner of a very high blank wall. It did this a few times and I was puzzled.

“It couldn’t be feeding or pecking at anything from the wall as there was nothing visible on it except for some smudges – was it on some kind of suicide mission? The hits were relatively hard and could be clearly heard as the wall is solid concrete.

“The next day I stood watch, but observed nothing. I did this a few more times but again did not encounter the ‘wall hitting’ incident again. I did however look as carefully as I could on the spot where the bird had ‘bombarded’ the wall, and I was very sure though not absolutely certain that the smudges on the wall was growing and indeed, ‘strands’ were starting to appear on the wall. See the attached first pic that was taken on 2 Sept 2009 (above left).

“My off-and-on monitoring continued, but things were painfully slow – I gave up on the idea of counting the strands on the wall.

“I’ve been away for the last week. This morning, I went back to observe and there was a distinct nest sticking off the wall. But little did it look complete to me until I went back this afternoon and to my surprise found the house swift sitting in the nest – see the second attachment (above right). No eggs are yet visible and I can only imagine how precarious the whole set up is.”

Note: Our bird specialist R Subaraj confirms the identity of the bird, “Certainly looks like a House Swift on the nest, though the nest appears incomplete.” What Poh Bee was initially observing could well be the beginning of nest building on the vertical wall. The bird uses saliva to attach the nesting materials together and to fix the nest to the substrate. 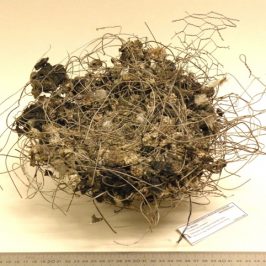 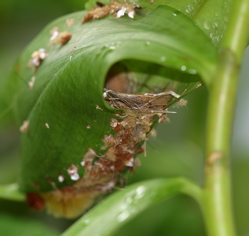 The nest of the Common Tailorbird (Orthotomus sutorius) was collected from my neighbour Sheng Lau’s...