In late May 2009 Dato’ Dr Amar-Singh HSS came across a Yellow-bellied Prinia (Prinia flaviventris rafflesi) building a nest almost at his feet at the Tambun Interior, Perak, Malaysia. He went back two weeks later to check on the progress of the nesting but to his horror the tall grass in the area had been cut and the nest destroyed. Many other nests were also destroyed but he came across one that had been exposed by the grass cutting. He managed to watch this exposed nest that had one chick (above left) with both parents feeding for close to two hours. The above image on the right shows a female bringing prey to the nest. “Got cooked by the sun but was worth it,” he added. “I stayed as far away as possible and the parents seemed reasonably comfortable with my camera and lens camouflaged.” The composite image above show some food brought to the fledgling, almost every 60 seconds. Much of the prey were small beetles. The female brought prey more often to the nest, but this could be due to his presence making the adult male more wary and playing a protective role, or so Amar thought. “You can differentiate the adult female from the male by the white supra-loral stripe above the eye. Also tends to give the female a white ‘eye ring,'” added Amar. The composite image above shows the female on the left and the male right. “Some males also have a small white supra-loral stripe above the eye but it is small and not prominent (my experience, unlike the field guides, is that this is not uncommon and may change with breeding plumage). In addition, the tail in females is shorter. The best guide for me in the field is the behavior – males are more vocal, are more “aggressive” (more protective when we come near the nest). I have often seen them as pairs so the differentiation is not difficult if you see their behavior side by side.” 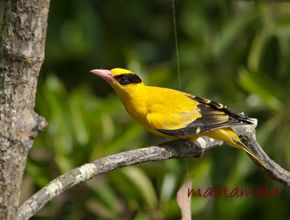 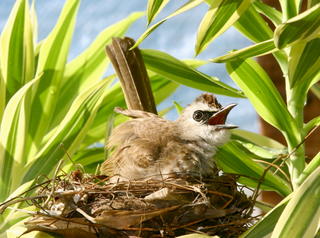