Lena Chow initiated the controversy when she posted an account of Yellow-vented Bulbuls (Pycnonotus goiavier) flying out from a tree canopy after the rain way back in June 2006. Three years later in July 2009 she posted another account, this time with photographic evidence, of the same phenomenon.

This time, Jeremy Lee responded with his experience of hearing the bulbuls singing and darting in and out of the canopy of a palm, also after a heavy downpour and around sunset.

Gan and KC Tsang suggested that the bulbuls could be catching alate termites that emerge from their nests after the rain – see termite hatch HERE. However, Lena and Jeremy failed to see any termites around at the time.

The debate this time expanded when Dato’ Dr Amar-Singh HSS related his experience in Perak, Malaysia: “…I have seen the behavior you describe many times in my neighborhood.  Always after a heavy rain, preferably after a very hot day.  They are eating flying insects that have been pushed out by the heavy  rain (I think these are *ants that fly to mate).   Although observers may say that there were no flying insects about,  these alate termites are hard to see. But Lena’s pictures look classical of feeding behavior.  Often I have seen the Oriental Magpie Robin (Copsychus saularis), Black-naped Oriole (Oriolus chinensis), starlings and even once,  nightjars feeding together with Yellow-vented Bulbuls.” And “Javan Myna (Acridotheres javanicus) also,” added Margie Hall that Amar agreed.

Margie Hall has this to say: “The only explanation that I can think of that does not involve alate termites would relate to the fact that Yellow-vented Bulbuls actually roost together in large numbers, although they fly into the roosting trees singly and in pairs in the evenings and fly out singly and in pairs in the mornings and never give an outward impression of there being so many in one tree (observation). You actually have to watch a specific tree or bamboo clump or whatever over a period of time in the evening to count them all coming in to the same place.

“It could be (suggested explanation) that after a heavy rain in the evening, when there are many of them in the same tree, that they come out individually and in small groups to get the raindrops off their wings and to readjust themselves in various ways before settling in again to roost.”

Lena has added: “It seems the subject behaviour only occurs in the evening, even though the rain has stopped a few hours before. I wonder if anyone has seen this behaviour in the mornings (after night rains) or afternoons?”

Obviously the conclusion is incomplete and we need more observations. Lena will be monitoring the situation further and others as well, now that birdwatchers have been made aware of the phenomenon.

NOTE: Alate termites are winged reproductive males and females that swarm out of the colony in a nuptial flight usually during dusk and after a heavy rain. 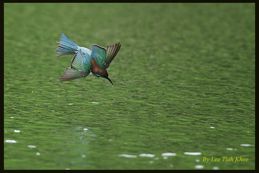