An earlier post on a possible hybrid bee-eater sighted by a beginner Indian birdwatcher in Chennai attracted the attention of veteran Malaysian birder Dato’ Dr Amar-Singh HSS of Ipoh.

“In October 2008 I noticed an unusual juvenile Blue-throated Bee-eater (Merops viridis viridis) in my garden for two days.

“Three of the four bee-eater species often come to our urban home to feed. I noticed this rather odd looking juvenile Blue-throated Bee-eater (above left). It came twice with an adult (above right). I observed it being fed but it could also get prey on its own. The orange throat is really odd, especially in combination with a rather mature crown. Have seen many juvenile Blue-throated before but not seen or read of this colouration.

“I considered that it might be staining (like some wood peckers) but the shots do not suggest this. Any ideas please? Genetic variation? The adult’s throat and breast also looks a bit odd (not uniformly coloured).” 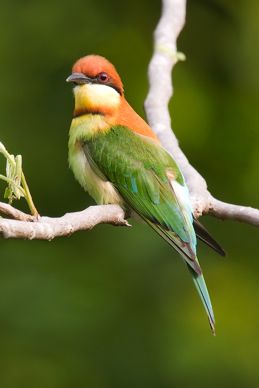 Bee-eaters belong to the family Meropidae. There are 25 species, mostly African. A few are...