“I am just a beginner to bird watching. Have been doing so for the past two years in areas in and around my hometown Chennai, India.

“This is a nice web site that I visit from time to time to mostly admire bird photos. I recently saw your articles on interbreeding in birds [1, 2, 3 and 4]. Would like to ask you if any interbreeding has been observed among different bee eaters. “I am asking because I observed a pairing between Blue-tailed Bee-eaters (Merops philippinus) and Little Green Bee-eater (Merops orientalis) and have enclosed a photo of the resulting young one (left). I took this photo in Chennai, India.

“I was inside the Theosophical Society, Chennai, for bird watching and bird photography. After sometime I sat in a secluded spot under a tree. I was accompanied by a small female black dog and she was rolling on the dried grass and enjoying herself. There was a lot of bird activity nearby. I took my camera and waited for the right moment. I was not disappointed. I saw a pair of Eurasian Golden Orioles (Oriolus oriolus) flying from one bush to another. The male finally settled down in the Jack fruit tree and posed quite nicely for sometime. The female bird was nearby in a bush.

Then, I saw the Little Green Bee-eaters diving and catching flying insects. I noticed that one of the birds looked different from the others. I waited for the bird to sit still so that I could take a photo and try to identify the species. As you can see from the photo, she/he looks very much different from the Little Green or the Blue-tailed. I think this is an offspring of the Blue-tailed and the Little Green. As far as I know interbreeding among these two species of bee-eaters has not been observed previously. Being a beginner to bird watching and bird photography it was quite an experience to observe something new.” 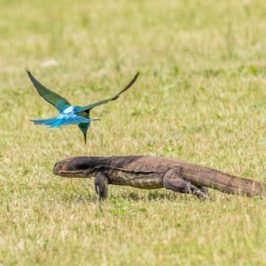 Recently a large Malayan Water Monitor (Varanus salvator) trespassed into an area in Punggol where...