On 3rd September 2009, Connie Khoo sent a note from her base in the Malaysian state of Perak to share her finding of a new behaviour pattern among the Jungle Myna (Acridotheres fuscus).

Cooperative breeding has been reported in the family Sturnidae that includes starlings and mynas. Eleven species of African starlings have been known to indulge in cooperative breeding. Among Asian species Shining Starling (Aplonis metallica) and possible Yellow-faced Myna (Mino dumontii) may also be involved in such behaviour. But not Jungle Myna.

Cooperative breeding refers to cases where the two adult parents are assisted by helpers to care for a single brood of offspring. The helpers are generally non-breeding birds, often the siblings from the last brood. Helpers, besides helping in feeding the chicks, may also assist in territorial defence and nest building.

“On the morning of 5th August 2009 I was at the limestone hills at Kek Lok Tong in Ipoh, checking on the nests of the Java Sparrow (Padda oryzivora). While there, my attention was directed to a pair stealing nesting materials from a nearby nest of the Jungle Myna. “It was then that I noticed a family of Jungle Myna flying in and out of a crevice where their nest was. The adults were accompanied by two juveniles, whose plumage appeared abnormal – genetic freaks probably (above). Then I heard chicks calling from inside the crevice.

“Curious to find out more about the genetic freaks, I was pleasantly surprised to see one juvenile helping to feed the chicks. The chicks appeared mature enough to fledge anytime.” The above image (left) shows an adult with a juvenile; that on the right shows a helper feeding the chicks in the nest.

Dr David Wells, in answer to Connie’s queries, wrote: “Freak plumage has allowed you to discover that Jungle Myna has ‘helpers at the nest’. This behaviour in birds, and often involving immature from a previous brood, but (to my knowledge) never before recorded in this myna. Well done!” 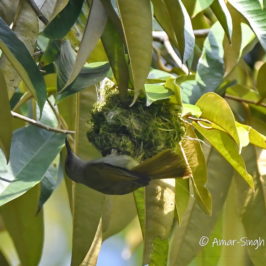 A few of us observed a pair of Plain Sunbird Anthreptes simplex nesting today (19th May 2022) at... 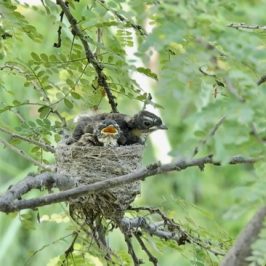