Mike CK Tan came across a strange looking nest sometime in August 2009. In fact there were two such nests at Seletar. Nearby there were nests of Baya Weavers (Ploceus philippinus). Unlike these nest that were attached from a single point with the globular nest dangling down, these strange nests were weaved along a slender branch and another point above as anchor points. The structure looked like a purse but there was no opening for the bird to get inside.

That the nests were the work of weavers is obvious. But whether it was Baya Weaver or some other species has not been ascertained. No birds were around. Dr Jonathan WK Cheah suggested they could be the work of the Streaked Weaver (Ploceus manyar). But then, according to R Subaraj, such nests are more rounded, with an opening along the side.

In Baya Weaver, the male weaves a solid “helmet” stage that needs the approval of the female before it is completed. Can this be an abnormal initial stage? John Vickerman, our bird behaviourist, has this to say: “Like yourself, I am completely stumped as to what the purpose of Mike’s structure can be. I would certainly agree that it would appear to be the work of a weaver bird, but in the absence of any bird sighting at the “nest”, the creator of this structure will probably remain unknown.

“Is it an isolated nest on its own and well away from any weaver colony, or can we gather any clues from any other nesting weaver species not too far away?

“The only thoughts I can offer are that:

“1. Some weaver species will construct roosting “nests” e.g. Thick-billed Weaver of Southern Africa, but these roost “nests” retain the general shape of a breeding nest minus the entrance funnel. Since it seems Mike’s nest has no entrance hole at all, the object of building such a structure – assuming it to be complete – doesn’t really make any sense.

“2. As you suggest, YC, a young and inexperienced male bird has had a go and not really quite got the right idea of what to do. However, the building method to employ should be hard-wired into the birds’ brain. So is there a genetic defect here?

“3. Genetic defects can occur in the normal course of events, but might there be mixed genes at work here with a hybrid bird? In either case, this could result in nest building faults such as we see here. The result would almost certainly be rejection of the nest and its creator by any female thus bringing to a rapid halt any continuation of the defective gene line through non breeding.

“Sorry I can’t give any definitive and exact answer to what may lie behind this interesting photograph from Mike, but it would be useful if he can keep his observations going in the area of this nest to see if he can gather any additional observations either of any changes to the structure of this nest or of any bird showing an interest in the nest.”

Obviously birdwatchers need to be more observant to look out for weavers building such nests. 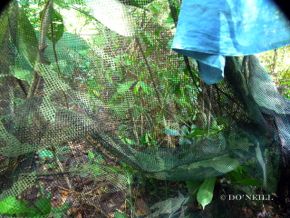