The mating and nesting rituals of a pair of Black-thighed Falconet (Microhierax fringillarius) have already been posted earlier by Connie Khoo: see HERE. The current post, also by Connie, involves the strange hunting behaviour of this pair of falconets during their nesting period as observed in early February 2007. The pair of nesting Black-thighed Falconet had already established an eyrie or nest on the limestone cliff. So it appeared strange that they were observed collecting pieces of long dried grass. Also, these falconets are not known to make use of any nesting materials to line their nest. Through further observations, they were seen bringing these grass pieces to another site nearby, a sort of “false eyrie” (above right). A male falconet was later seen in the false eyrie with one eye closed and the other keeping watch on the ground below (above left). He would dive down the moment he spotted a foraging Eurasian Tree Sparrows (Passer montanus) on the ground below and returned to his eyrie to feed the chicks. These falconets are also adept at catching House Swifts (Apus affinis) on the wing. Note: Black-thighed Falconets usually make use of abandoned nest holes of barbets and woodpeckers. Occasionally they nest in holes under eves of buildings. No materials are used. Where they nest in tree holes, wood chips can be found but no other nesting materials are added. In other nesting holes, insect remains can be found. On limestone cliffs, these falconets seek out the many natural cavities on the limestone face.

All image by Connie Khoo. 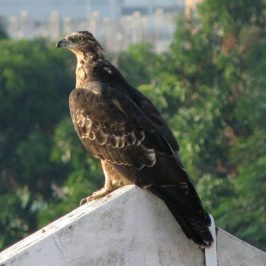