“The sight of common house crows perching on TV antennae of high rise apartments in Singapore is familiar to all. How about that of the Peregrine Falcon (Falco peregrinus)?” ask Sun Chong Hong.

“On 24 Feb 09 at about 6.30 pm, I saw a bird flying towards a 25 storey HDB block in Bishan near to the Bishan Park. At first I thought it was a house crow. After a short while, I realised I was mistaken because the way the bird flapped its wings was different from that of the crow. While crows flap their wings more gracefully and look more flexible, the movement of this bird’s wings appeared to be stiff. It landed and perched on the antennae and started to preen itself.

“For the next 7 days or so, the bird would come and land on its perch between 6.30 pm and 7 pm. However, since yesterday (4 Mar) the bird was no longer seen.”

According to Tudge (2008), “Peregrines are taking to city life worldwide. For them, the towers are cliffs – just right for nesting; and there are pigeons aplenty to feed on.”

It seems that in Singapore, they are getting common, especially during the winter migratory months, although a few are also seen during the non-migratory season as well. According to our bird specialist R Subaraj, “based on colouration and size, these birds are believed to be visitors of the resident race from some place nearby, like Malaysia. These falcons are often found on transmitter towers, including Bukit Batok, Sentosa, Ubin and even Fort Canning. These structures offer a good vantage point, feeding and roosting perch.”

There are always plentiful mynas and starlings to provide food for these raptors in urban and rural areas. See also below. 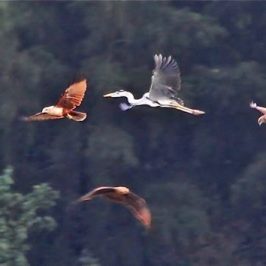