Connie Khoo was at Malaysia’s Cameron Highlands doing some light birding in late August 2009. There, she chanced upon a large flock of more than a hundred cuckoo doves all roosting together in the early morning. For three consecutive mornings the cuckoo-doves were at the same site roosting. There were two species, Barred Cuckoo Dove (Macropygia unchall) (above left) and Little Cuckoo Dove (M. ruficeps) (above right). Hidden under thick vegetation were two raptors – the Rufous-bellied Eagle (Hieraaetus kienerii) and Blyth’s Hawk Eagle (Spizaetus alboniger). Both raptors have a reputation of taking birds and they were eying the doves.

As soon as a raptor flew out of hiding, the huge flock of doves dispersed in a burst of flapping wings.

According to Connie, “David Wells mentioned that he never ever saw communal roosting by cuckoo doves, let alone two species roosting together. Seems there is no end to making new discoveries.”

All images by Connie Khoo. 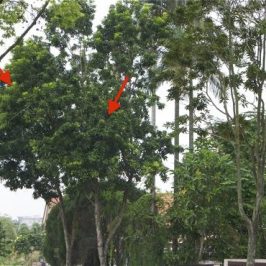