Lim Jit Yin was alerted to a nesting pair of White-rumped Shama (Copsychus malabaricus) in Singapore’s catchment forest recently. The adults were feeding their chicks a variety of foods that included centipede (above left), grasshopper (above centre) and ?cockroach (above right).

“…it was very interesting observing how careful the female bird was, hopping from branch to branch with the food over as long as 20 minutes before flying to the nesting hole (below). The male didn’t do much feeding but was heard nearby. After each feed, the female seemed to pick something (possible a faecal sac) from the nest and flew off with it. “When intruders came near to the nest (squirrel, monkeys, other birds), both adults did a very odd click-click-clack call.

“The chick is at least a couple weeks old by now, any idea when it will fledge?” wrote Jit Yin.

Wells (2007) reports that there is no information on the incubation and fledging periods. However, in one case the brood left the nest 27 days after the laying of the last egg.

The White-rumped Shama is a rare resident, breeding mostly in the offshore islands. The mainland population is of mostly males, possibly escapees. Of late, there was a successful nesting and chances are that the species is making a slow comeback. However, these birds are still a target of poachers as it is a spectacular songster with a great variety of whistles and it has the ability to mimic other birds. 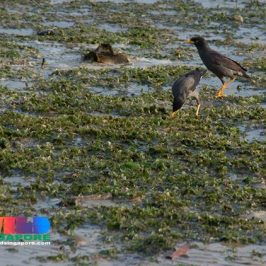