The two earlier posts on a Sooty-headed Bulbul (Pycnonotus aurigaster) and a Yellow-vented Bulbul (P. goiavier) pairing up and starting a family (see here: 1 and 2) got a further attention from our bird behaviourist, John Vickerman, who wrote from his base in the United Kingdom:

“Thanks for keeping me updated with the developments of this mixed pair of bulbuls.

“Although there must be uncertainty still, I suspect, based on the behaviour shown in the pictures, that the adult male of the pair is the Yellow-vented for the following reasons:-

1. It is the Yellow-vented that appears to be taking the initiative in the mutual preening. Both sexes of many bird species do preen each other but it is generally the male that instigates the process. There is only one picture here to go on with this behaviour so it can only be a speculative guess.

2. However, this guess is strengthened when we see the two birds perched side by side on the irrigation tap. It is the Yellow-vented that is, though only very slightly because it is the highest point available, the higher of the two birds. Males tend to occupy the higher perches demonstrating strength and dominance to a prospective or established mate.

3. The bird carrying the fruit food for the juvenile is the Sooty. Although both sexes of most birds feed their young, the females tend to show a greater maternal instinct and feed young birds more often, so I would suggest the Sooty is the female bird.

“My guess is that this pair of adults has been significantly less successful in producing young than would a same-species pair in that I would expect a same-species pairing to raise more than just one juvenile to the fledging stage. If true, then this would consolidate well proven data that hybrid pairings, generally, are less productive than same-species pairings thus reducing the proliferation of hybrid birds in the wild”.

“The sex of the juvenile hybrid will remain unknown for quite a while. Whether it is fertile or not – whether male or female or sexless – remains to be seen given that it survives to potential breeding age. However, its ability to survive as “the odd one out” in the wild and even to attract and be selected as a mate at some stage – even if it is fertile – mean its chances of continuing the hybrid line are much lessened. 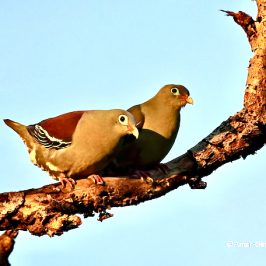 I was privileged to observe the courtship behaviour of a pair of Thick-billed Green-Pigeon (Treron...