Mark G. documented a male Laced Woodpecker (Picus vittatus) feeding his chicks in early July 2009. The nesting cavity was excavated about a metre up the trunk of a living tree in Singapore’s Jurong Chinese Garden. The male bird was looking around before he flew to the nest. The female was around nearby. There were two hungry chicks that needed to be fed regularly. The chicks fledged a week later. The fledglings, a male and a female, were seen around the area when Mark returned some time later.

Laced Woodpeckers excavate mainly dead tree trunk. This is one of the rare occasions when the nest was excavated from a living tree. A clutch of two eggs is the norm and both adults incubate and brood the chicks as well as look after the fledglings.

Our bird specialist R Subaraj has this to say when asked whether fledglings can be sexually differentiated: I am not too sure about this. Given the advanced development of the youngster (only the pale gape gives it away) begging from the hole, one would think that it is a female. However, I have seen a young male accompanying one or both parents on several occasions… and it had a crown that was part black (toward the back) and part red. So, it is possible that male fledglings slowly develop the red crown, as they mature. This seems to be confirmed by Wells (1999), when he states “Juveniles as adult……cap of male mottled black, to all-black posteriorly.” Having said that, and considering the advanced development of the youngster in the hole, it should show a bit of red in a male.”

All images by Mark G. 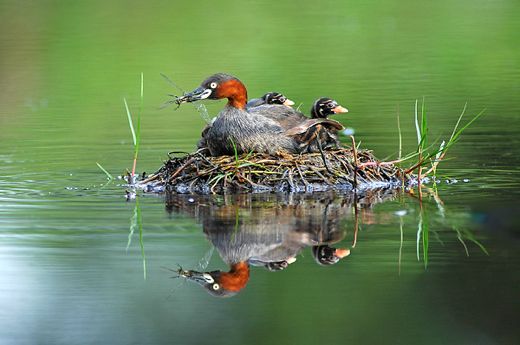 Jimmy Tan a.k.a. skylark photographed the nesting of the Dusky Broadbill (Corydon sumatranus) at Kinabatangan,... 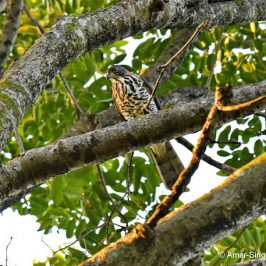