Lena Chow’s Pacific Swallow (Hirundo tahitica) chicks nesting at her office have fledged when about 20 days old – at 9.30am, 1 Aug. 2009. First one chick fledged, flying out of the nest accompanied by a parent. Then the other, also accompanied by a parent. The second fledgling was seen flying around the carpark near the nest, wobbling as it perched on broad metal railings near the nest to rest, before flying off into the distant trees.

It was sad to see them go, after observing them in the nest for so many days. As Lena writes, “On the bright side, they will probably come back to nest in the same area, or use the same nest since they were successful this round. Last year, they nested at a water sprinkler just 3m from this one – both situated at the top of an open stairwell, where it is warmest with warm air collecting near the ceiling.”

First there were three chicks, then there were two, as the youngest was most probably pushed out of the nest by its siblings (below left). The two chicks were always hungry, like any chicks. They gaped widely to show their yellow-orange bottomless pit of a throat (below right). The adults visited regularly to deposit food down these throats, never seeming to satisfy their hunger. One result of all the food deposited into the chicks was the amount of waste littering the nest rim and the floor below (below centre). The thick yellowish oral flanges were still apparent at this age, 15 days old. As the chick grows older, these flanges will gradually disappear. At this stage they act as targets for the adults feeding them. Unlike some nestlings that deposit their waste in a neat faecal sac to be removed by their parents and dropped a distance away, these swallow chicks simply stuck their butts out and shot a projectile over the edge of the nest. A skill yet to be perfected by the looks of the increasingly dirty nest edge (above). 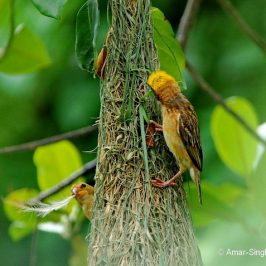