John Vickerman, our bird behaviourist, has this to say: “Yes, definitely birds can and do respond to calls and songs of different species. Alarm calls, e.g. given when a bird of prey is around, will send small birds of all sorts of species scurrying for cover very quickly. So alarm calls of many species are readily understood by other bird species.

“I don’t know enough about the similarity, or otherwise, of the songs of these two species of bulbul, but since they are fairly closely related, and the songs of most bulbuls consist of a wide variety of melodic content, I would assume that there is some acceptance between these two birds of each other’s songs which, though unusual, has led to the “pairing” of these two birds.

“Breeding success rates of hybrid pairs are nearly always much lower than of same species pairings, and hybrid birds are often infertile or are not selected for further breeding attempts. Wildfowl, game birds and some finches are a bit of an exception here there being all sorts of peculiar “Heinz 57” mixtures largely resulting from farmed or caged breeding. Such occurrences in the wild though happen much less frequently.”

Our bird specialist, R Subaraj adds: “The Yellow-vented Bulbul has seemingly paired off with a Sooty-headed Bulbul. The latter has a feral population in Singapore, which is presently confined to N.E. Singapore, particularly from Pasir Ris to Seletar Camp (including Lorong Halus area). However, fresh escapees have been encountered in various other areas over the years.

“The Sooty-headed Bulbul has either a red or yellow vent, depending on the race. The Singapore feral population is claimed to be of the race P. a. aurigaster (Robson (2008). However, we cannot rule out escapees of the other yellow-vented races (P. a. thais and P. a. germani). [Escapes with red vents have also been recorded in Singapore.]

“A most interesting record. Curious that both have yellow vents… was that the attraction?” 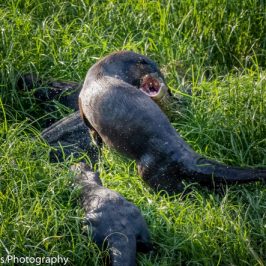 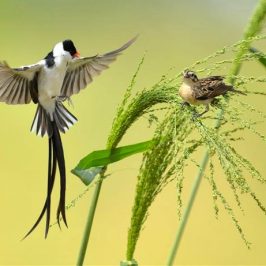