Dato’ Dr Amar-Singh HSS is an avid birder from the Malaysian state of Perak. A birdwatcher for more than 35 years, he has since given up ticking off new species on his checklist. He is now into the more interesting aspect of getting to know birds better. The book he just published, A Friendship with Birds (2009, Desktop Systems, Ipoh), shows off his intimate knowledge of bird behaviour.

Recently he chanced upon a male Raffles’ Malkoha (Phaenicophaeus chlorophaeus chlorophaeus) collecting nesting materials (below). The bird was picking fresh leaves as well as tearing off leaf pieces and flying to this thick tangle of climbers about 5 metres from the ground to slowly construct his nest (left).

The Raffles’ Malkoha, unlike most cuckoos, builds its own nest. According to Wells (1999), the nest, built entirely by the male, is a shallow platform of twigs lined with green leaves and constructed 3-8 metres up in a forest thicket. Breeding in Peninsular Malaysia, again according to Wells (1999) is from March to May. However, much is not known about its breeding behaviour and life history. 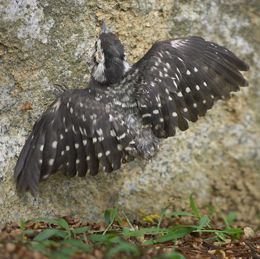