The two bee-eaters rescued from Nest #1 were ready for release as their wing feathers were fully developed and they were regularly exercising their wings (left). As Dr JWK Cheah wrote, “They were deemed ready, when they were ‘kimono-ing’ – a term of wing spreading as observed in many species, for example Dollarbird (Eurystomus orientalis). They found perching ‘easier’ than standing on the ground. When exposed to sunlight, they were very excited and calling loudly – when other bee-eaters in the neighbourhood were singing.”
.
.
.
. YY Chong continued, “… they were brought to the site (above). They seemed very curious about the surrounding not knowing that they would be released soon. We took them out of the cage and one of them quickly flew off (below). “…In another 10 minutes or so, the second bee-eater flew off, after perching on our fingers for some time. It was their first time flying, and we observed that they seemed to be flying slightly off a straight course, undulating up and down slightly. Just hopped off and they knew how to fly… Amazing!”

Image of the juvenile by Dr JWK Cheah, others by YY Chong. 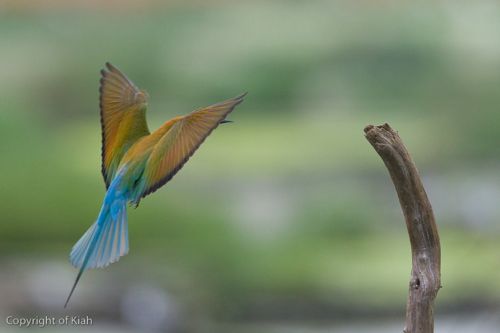