On 10th July 2009 KC Tsang wrote: “Looks like this Oriental Honey-buzzard (Pernis ptilorhyncus) likes to pay me a yearly visit. This time he was looking at me from the roof of the opposite building. What made me look out was the noise the House Crows (Corvus splendens) were making while mobbing the OHB, later the Black-naped Orioles (Oriolus chinensis) also joined in the mobbing (above). I noticed that he has got a yellow cere too.

“He should have told me that he was coming, I could have ordered a fresh bee’s hive from Cold Storage for him to feed on…”

Margie Hall commented: “If this fellow or fellowess has got a yellow cere, then s/he is a juvenile. I don’t know how many years they can be juveniles, but I guess maybe for two years, so this could be same one as last year.” Dr Chaiyan Kasorndorkbua of Kasetsart University, Bangkok, Thailand, an expert on raptors of the region, replied when consulted by KC: “This is a non-adult Oriental Honey-buzzard, likely of orientalis race. Note the pale yellow iris/cere indicating its non-adult age (dark in adult for cere and bright yellow in female or dark brown in male for iris in migrant race and bright yellow in both sexes for resident torquatus).

“The somewhat black neck collar and dark brown underparts is typical of either orientalis or ruficollis race, which can not be resolved by the photographs and required measurement of wing lengths and other biometrics.

“Anyhow, I think that this bird is an oversummer migrant OHB, note in the first picture (above left) the very worn outer primaries (at least P6-10 counted descendantly) and newly-molted inner ones which clearly show wide dark subterminal of male sex. The molt contrast (i.e., pertaining both old and newly-molted flight feathers in this case) typical of immature or non-adult birds and excludes a juvenile (or first-year) of resident torquatus race, theorectially fledged recently this year). The molt pattern of this bird is consistent with a second year bird or an adult resident but, from the photos, no crest is observed, another point to rule out the torquatus race. Thus, in summary I think this bird is a second year migrant OHB.”

We then had a word from Lim Kim Chye, Malaysian Nature Society’s Bird Conservation Council member, in reply to Dr Chaiyan: “Thanks for the detailed summing up on your conclusion that this is migrant OHB. Agree that, based on plumage appearance, this bird is well past juvenile (1st yr) and may be older….also, as you say, the wing moult pattern confirms this. However, I’m concerned with the yellow iris, which is characteristic of torquatus. To confuse matters, form orientalis also has yellow iris, thus I’m not sure what to conclude.

“But I’m inclined to agree with you that this may be migrant OHB, based on plumage pattern and also lack of crest (quite obvious in juv/?imm torquatus). I think we need to study chick plumage development of resident OHB in more detail in order to be able to definitely ID the various OHB ssp.”

And Dr Chaiyan’s response: “While I do not know what age (in term of year) orientalis male will attain the dark brown iris, the ageing of this one as a 2nd year and the wide subterminal band on trailing edge would point to 2nd-year which is an immature that may not develop the iris as reported in adult sexes. Also note the cere where it is pale yellow, this feature indicates that the bird is not fully adult, thus we may rely on the iris color for sexing, esp in immature plumage.

As to the need to study chick plumage development… “Definitely true and agreed. As of now I can ID the torquatus with confidence by the crest and the underwing/undertail barrings of male with yellow iris (as Kim Chyle pointed out and documented by late Laurence that the iris color is similar in torquatus male and female).”

All images by KC Tsang. 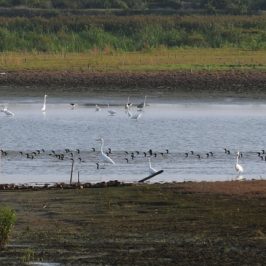 The Little Cormorant (Phalacrocorax niger) used to be uncommon migrant to Peninsular Malaysia. A summary...