“I was walking around my backyard taking pictures when all of a sudden a Dark-necked Tailorbird (Orthotomus atrogularis) flew out of a cluster of blue ginger plants. All I saw was a nest and a pair of angry parents…

“The next day everything was normal… until about 4pm when tailorbird cries were heard (below left). “It was a contingent of four sunbirds, one male and three females. The male and two females were trying to fly away to escape the tailorbird’s wrath, while the fattest female sunbird simply sat on a nearby perch about a metre away simply preening herself (above right).

“The tailorbird, holding a caterpillar in its beak, was all the more angry, flying above, beneath, beside, and all around the sunbird, calling all the way. This female sunbird didn’t bother except to follow the tailorbird’s movement. After awhile… the sunbird went back to preening.

“In sheer desperation, anger and frustration, the tailorbird swallowed the caterpillar and sat on a perch very near to the sunbird… Even for the sunbird, who was 150% the tailorbird’s size and probably twice its weight, this was too close for comfort. It raised both wings in a threatening gesture for about two seconds, then thought better about its size… not very necessary. It went back to preening. “After ten minutes of abusive birdsong, the sunbird flew off, leaving the tailorbird and its ‘don’t come back’ calls for another five minutes, when the tailorbird quit calling and flew off. Then it flew right back to the same perch and started to preen itself again.

“The next day, the tailorbird nest (above left) was in three pieces: one half on the ground, another half also on the ground (above right), and the entrance-roof was still stuck to the leaf (above middle). I presume the tailorbird chick was calling too loudly and a cat decided to get an easy meal…” 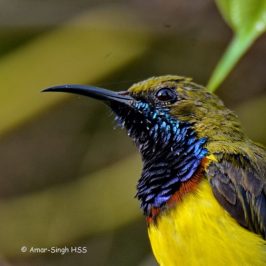 “Above and below images show a male Olive-backed Sunbird (Cinnyris jugularis flammaxillaris) with some moult... 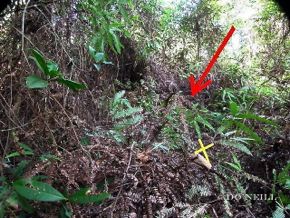 “I returned after an absence of 28hours and parked myself at the usual observation post.... 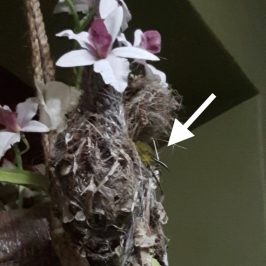 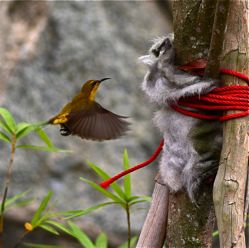