Part 1 on courtship and mating; Part 2 on nest excavation; Part 3 on feeding the chicks and Part 4 on flight sequence have been posted earlier. The current post on the continuing saga of the Blue-throated Bee-eater (Merops viridis) is documented by Micky Lim a.k.a. limmick . The St Andrew’s Community Hospital was being re-developed to become the new St Andrew’s Autism Centre. The buildings and grounds have been abandoned for some time, thus the area has been devoid of human activities and ideal for the nesting of the Blue-throated Bee-eaters. Four pairs excavated their nests on the abandoned field and reared their broods.

Unfortunately in June 2009, all that was about to come to an abrupt end as the construction crew moved in to perform the re-development work. The heavy equipment and machinery moved in and quickly work began. The first few days of late June was just initial ‘light’ work carried out in the opposite field. This did not seriously threaten the bee-eaters as yet. As the days progressed the nesting area became threatened (above). The group of photographers who had been documenting the nesting were concerned about the impending destruction of the nests and discussed the situation with the workers at the site. The management was most supportive and understanding. These workers – mainly foreign workers from various Asian countries – China, Myanmar, Thailand, India, etc. were extremely helpful and proved to be nature supporters. They even went to the extent of marking the nesting holes with red and white tapes (below) and took extra care to avoid the nesting sites when driving their heavy vehicles around. And so the Blue-throated Bee-eaters were given a slight respite and continued with their very busy nesting activities unabated for the moment – albeit with slight disturbance from us humans.

Perching on their favorite branch with prey just prior to going to the nest for feeding; launching off the perch to the field (above left); checking for “coast clear!” before entering the nesting hole (above right) and shooting out from the nesting hole (just like a rocket) after a feed (left). Each feed usually lasted about 30 seconds to one minute… there were none of the elaborate flying patterns demonstrated on landing (see Parts 3-4) but just direct flight in and out of the nest.

All images by Micky Lim. 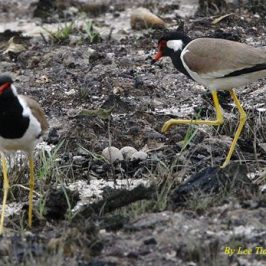 Lee Tiah Khee has been keeping watch on a pair of Red-wattled Lapwing (Vanellus indicus)...