“Was working on one of the tributaries of the Kinabatangan in Sabah when we came across a small flock of Oriental Pied Hornbills in the tree. We spotted one that was hopping around a small plant, looking at something. I noticed that hornbills do not seem to be able to look straight at an object like the way we humans do. It must be because of the huge cast, and bill that blocks a straight forward binocular view. So the bird had to kind of look at the caterpillar with a side glance, and than it moves and uses the other eye to look again at the prey which is at a very close range. Than finally it worked out the range and got the prey with a couple of pecks.

“Now having got the prey, it begins to rub, and hit the caterpillar on to the branch as though it has to remove those hairs that some caterpillars have. But this hawkmoth caterpillar does not seem to have hairs on it. So it must be a force of habit. So only after it is satisfied does the bird flips the prey into the air and catches it with its huge bill in the middle, swallowing the prey whole.”

Note:
Gan Cheong Weei identified the caterpillar as that of a hawkmoth and Dr Leong Tzi Ming confirmed it, adding that it most likely belongs to the hawkmoth family, Sphingidae. 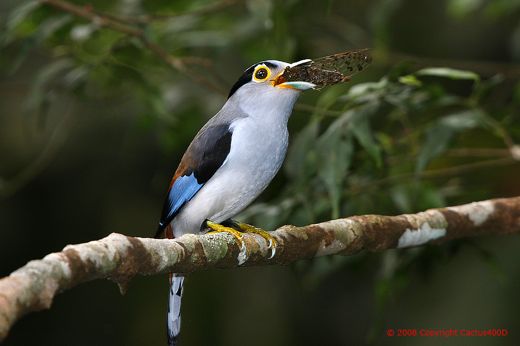 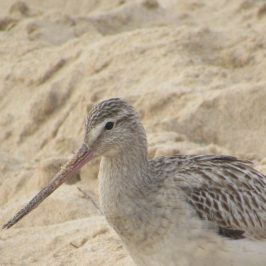