Lee Tiah Khee witnessed the hatching of a Little Tern (Sterna albifrons) chick on 21st June 2009. It was weak and fragile as most newly hatched chicks are. He visited the site again the next day and it was showing signs of becoming active, moving about, running around, and even flapping its little pair of wings. The adult was there, feeding it small fish (above).

On the morning of the 28th, the chick was alive and active. By afternoon, Mendis Tan brought news of its death. Initially there were three eggs. Two were destroyed, probably as a result of a cyclist riding over the nest. The remaining egg successfully hatched but the chick survived for only eight days. Then it died, its head under a rock.

According to Yang Weixing, both the adults were there, flying and moving around, calling for the dead chick (below right). One of them brought a fish, trying to feed it. The question in the minds of photographers is how did the chick died? Did someone killed it? Or did it die naturally?

John Vickerman has this to say: “…it seems there is little evidence to categorically state that deliberate human vandalism occurred here. Tern chicks’ natural reaction to perceived danger is to lie prostrate and motionless on the ground so as not to be seen (above left). A bit of a mistake if you happen to be on a busy highway of cyclists or pedestrians! On stony or sandy ground, tern chicks are almost invisible even when they are right at your feet. It may be that quite unintentionally, a cyclist may have run over the chick causing its death, or even a pedestrian could have trodden on it completely accidentally with neither act being known about by the causer of death who may have simply passed on unaware of what had just happened. Someone else following on may have seen the dead chick on the pathway possibly having been attracted to it by the parent trying to feed it, and may thus have placed the chick under the stone as an ‘act of burial’ and protecting the chick from further damage.”

Many photographers had been documenting the nesting and following the development of the single chick that survived and hatched. Its death saddened many… 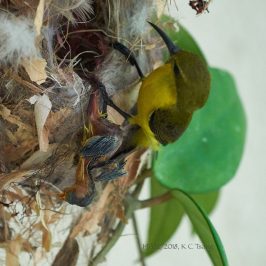