“A drenched fledging Lineated Barbet (Megalaima lineata) was first observed to stay motionless in a patch of grass today in a common park. Apparently, the chick had fallen from its nest located meters from it after a mid-afternoon downpour. The areas around its head appeared wet with exposed pink-colored flesh beneath. Unlike the parent bird, the fledging has jet-black whiskers and lacked the yellow ring around its eyes (above left). When observed from afar (~10m), the chick appeared to remain motionless with its eyes fully open. At closer proximity (~3m) the chick will shut both eyes and cock its head upwards, clearly exposing the pinkish flesh beneath its gigantic beak (reminds me of a frog mouth). Some black whiskers can also be observed directly under its lower mandible (top right). Interestingly when the observer shifted to a position directly opposite where he was standing (~5m away), the chick will open its eyes and try to position itself clumsily such that its face is now facing the observer. This reaction was observed consistently when the observer reverted to his original observation position. Again the chick will pick itself up, supported by shaky legs and repositioned itself to face the observer.

“At arm’s reach, the chick appeared flustered and made a feeble attempt to flap and run but only to manage a feeble half-foot displacement from its last position. Repeated attempts made by the observer to approach closer resulted to the chick making an attempt for a hole in the fence to seek refuge in the confines of the enclosure. After some cycles of fruitless wing flapping and run actions, the chick successfully tunnelled past the aperture in fence.

“During this entire process of chick movement, a single parent bird was observed to be located nearby on a perch observing and calling in earnest. While it is not clear if the parent bird will finally perform food ferrying service to its displaced chick at ground level, it is clear from this brief encounter that the parent is staying vigilant by its displaced chick.” 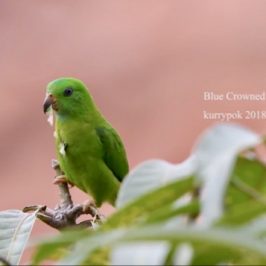 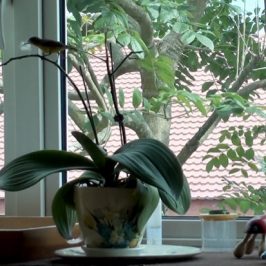