This is a follow-up of Capt. Yong-wah Sim’s a.k.a. captsim earlier posting on the Black-winged Stilts (Himantopus himantopus) in aerial combat. The observations were made in May at the Mai Po Reserve in Hongkong on an adult Black-winged Stilt brooding a pair of chicks.

The two chicks were wandering around feeding and chasing after the adult, probably the female. The female knelt down and one after another the chicks went under her wing and got a bit of a lift like human baby in the cradle of a mother’s arm. “And yes, this is quite normal brooding behaviour for this species. After all, if you are a short legged chick with a parent with legs as long as that, how else are you going to tuck up under your parent’s wings? So parent comes down to your level!

“There are quite lot of published photographs of parent Black-winged Stilts apparently with six legs! If the parent bird is suddenly spooked whilst brooding, the parent simply clasps the young to its body under the wings, and you see two long red legs rushing away and four short legs dangling beneath the body!” 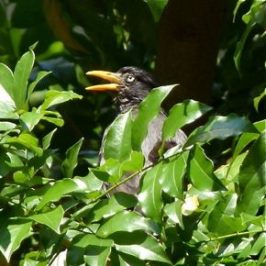 Patricia Thong started the discussion when she posted an image from her hand phone of...