Capt. Yong-wah Sim a.k.a. captsim was at Mai Po Reserve in Hongkong in May 2009 when his attention was drawn to four Black-winged Stilts (Himantopus himantopus) indulging in what looked like an aerial combat (above).

“I have never heard of such behavior of birds before. It seems like a fight or is it play? Finally the game was over with the victors pinning down the vanquished.” Our bird behaviourist John Vickerman has this to say: “This behaviour is almost certainly related to the defending of territory, and as is revealed in the last photo, the proximity of at least one young bird. I think one of the clues lies in the above photo where the four birds are together on the ground. It appears to me that the right hand pair is in retreat, and judging by their rather dusky coloured heads and necks are almost certainly non-breeding sub-adults. The breeding pair in this picture are bonding closely together presenting a strong and united force facing off the opposition who have invaded this established pair’s space.

“Satisfied that the sub-adults pose no further threat, one of the adults then bonds again with its chick in the photograph below.

“A nice set of action pictures here of a very elegant wader species. A good sequence telling the often fraught life of fending off intruders at breeding time.” To Yong-wah response that the “…defeated pair were still in the same area as when the fight or play first started,” John elaborates “…It is never easy to get the full picture of an often rapidly moving scenario from a few stills. It can be so easy to read something into a sequence of such pictures which isn’t there at all!

“Anyway, does the following sound plausible to you? In many wader species the word “territory” is perhaps not quite the right word! Often, the “territory” of a breeding pair is little more than a few paces around the actual nest, and then after hatching, since the young are immediately highly mobile, the “territory” becomes much more fluid and is based rather more on where the chicks happen to be at any given moment and if they are perceived to be being threatened.

“So if the chick(s) may have moved during the altercation when all four birds were up in the air, then the proximity of the “defeated” birds, although fundamentally in the same area as before, may not be viewed as a threat any more because of the changed position of the young.

“In addition, wader species can be an argumentative lot as is often the case with species that nest generally fairly closely to each other. For no apparent reason, the urge to embark upon a display of strength can be triggered after considerable periods of peace and calm reigning supreme. Such outbreaks of dissent are often difficult to find reasons for, but in this instance, may I suggest that it would seem to be related to the chick(s), their position and the parents of them to feel the need to assert their superiority.

“Black-winged Stilts are not really built for aggressive, physical combat (chickens and wildfowl being at the other end of the spectrum here), so intricate and skilled shows of aerial manoeuvering are generally good enough to discourage subordinates from chancing their luck too much! However, they are very capable of thrusting their sharp bills into places where it hurts if you happen to be a passing gull, but Black-winged Stilts really are no match for a determined gull or crow in search of a meal.

“I hope these comments may help a little, but please let me know of any additional thoughts you may have concerning this Black-winged Stilt behaviour.”

According to Peirce (1996), Black-winged Stilt, like most stilts, are gregarious by nature, more so outside the breeding season. Small groups often gather, giving spectacular display where they leap high in the air to descend parachute-like with wings widespread. They also indulge in aerial displays, flying to some 5-10 metre high and hovering, followed by flying higher and similarly hovering. This is termed “butterfly” flight. They also indulge in “mob-display” where a few birds get together and become mildly aggressive before dispersing. Why they behave thus has been puzzling ornithologists for years. 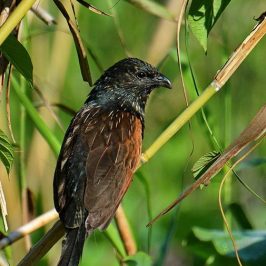 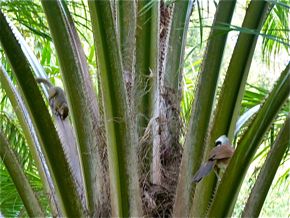 There were lots of activities around a young Oil Palm (Elaeis guineensis) at Singapore’s Kent... 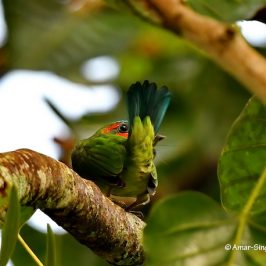 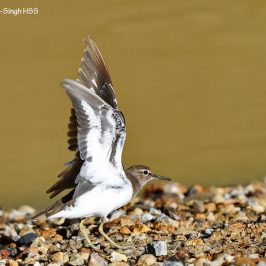