Lena Chow saw an albino myna on 30th May 2009 along the shores of Labrador Park. It was in a flock of about a dozen Javan Mynas (Acridotheres javanicus). The albino bird appeared to be accepted by the flock. Writes Lena, “I checked your blog and saw this article, so just sending today’s observation as confirmation and for the record.”

Yes, the earlier post reported the same situation, the albino being accepted by the “normal” members of the flock. It also reported an albino myna pairing with a “normal” bird. So the acceptance was more than skin deep.

As an albino bird looks different with its whitish plumage, it is usually not accepted by its conspecific, that is, birds of the same species. This was reported for an albino Collared Kingfisher (Todiramphus chloris). But mynas may behave differently. 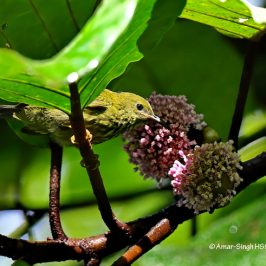 “This is one of two resident Pied Fantails (Rhipidura javanica longicauda) and one of our... 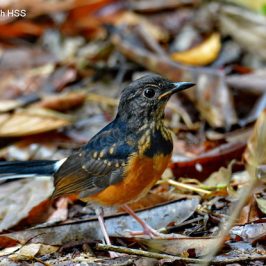