Samson Tan documented a pair of White-bellied Sea Eagle (Haliaeetus leucogaster) nesting high up a communication tower in March 2009. In the image on the left, the two adults can be seen perching on the left of the tower with the narrow platform where the nest is below.

The nest is a simple pile of twigs placed on the narrow platform. The eagles have been around this tower for a number of years and most times can be seen soaring above. Samson’s last visit on a bright sunny morning saw the eagles still around. One, probably the female, was near the nest, scanning the surroundings impatiently. The other, probably the male, was flying above. After about half an hour, the female suddenly moved to the nest. Then the male arrived to deliver a rat clutched tightly in his talons (below left).

Apparently there was a chick in the nest. One of the adults tore the rat into bits and fed the chick with the other standing by (below right). Once feeding was completed, the adults flew off, circling the tower, ever vigilant. They then returned to the tower, perching on different levels above the nest (top). After about five minutes, one left to forage. This was probably the male, leaving the female to brood the chick.

This is a re-post of the account appearing in Manta’s Experience… on 14th March 2009. Thanks to Samson Tan for permission to share his observations with BESG and for use of his images. 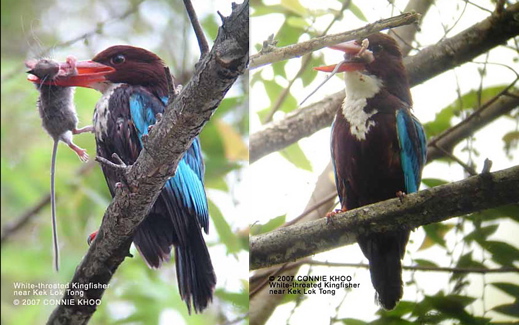