Samson Tan was at Singapore’s offshore island of Pulau Ubin on 21st March 2009 when he first noticed a pair of Asian Glossy Starlings (Aplonis panayensis) around a cavity at the top of a rotting tree trunk (below left). Samson returned on 3rd May and found that there was a pair of recently fledged chicks around (below right). The parent birds were then trying to chase these juveniles away. Returning further to Pulau Ubin on 17th May, he saw a pair of adult starlings at the same nesting area. What he subsequently witnessed puzzled him. The next two hours saw one or the other of the starlings returned at least four times, each time perching by the nesting cavity and regurgitating a fruit (below).

“Just don’t understand why the birds even care to carry the food back to their nest just to dump them away? Isn’t this a waste of energy? If they are not hungry or if the food is not suitable, why do they still want to fly back with it and later throw it away?” mused Samson. Based on what were known, two scenarios seem possible after consultation with bird behaviour specialist John Vickerman:

1. It is very possible that the starlings were preparing to raise the next brood on 3rd May when they were seen chasing the juveniles away. If this were so, by 17th May the eggs would almost certainly have hatched. When adult arrived at the nest and discovered that the chicks had been predated, it discarded the fruit.

This can go on for three days before that powerful innate drive to bring food to the nest gradually subsides and wears off. “I have seen a pair of European Bee-eaters carrying food to a nest for two days after the nest was totally destroyed by, in all probability, a fox. So the drive to keep returning to a nest where the parents expect their young to be is powerful indeed, and yet the level of understanding (in human terms) of such a calamity by the parent birds themselves, is virtually non-existent,” says John.

2. Because starlings do not have a crop to store food, excess food would be jettisoned if not required by the adult transporting it or if the chicks were already fully fed and not wanting more.

Anyone with a better explanation?

The images were first posted in Samson Tan’s Manta’s Experience… on 19th May 2009. 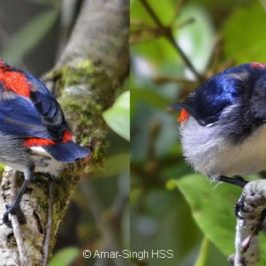 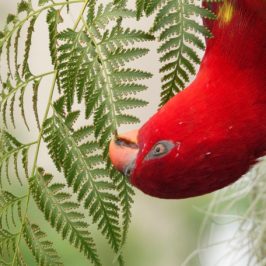