Jason Cho a.k.a. jcho has an interesting encounter with, what he thought was a confrontation between two male Red-breasted Parakeets (Psittacula alexandri) and a female in May 2009 at Changi Village in Singapore. The male was flying to a female perching just outside her nesting cavity and got involved in what looked like a confrontation. All the time another male was nearby just watching (above).

John Vickerman gave an interesting interpretation based on the images Jason provided: “…I don’t think they are actually fighting at all! I am happy to be corrected on this, but I think that male… has flown over to the female (black bill diagnostic for female) and she is expecting to be fed by the male since she will not spend time away from the nest hole foraging for herself thus leaving any eggs vulnerable to predation – egg brooding is almost entirely carried out by the female in nearly all parrot species.

“She is trying to stimulate the male… to feed her, and by presenting an open bill to the female, he is showing her that he is ready to feed her. The… female and the male almost locking beaks at opposing angles which is the moment when regurgitated food passes from the male to the female (below). It has to be done this way by definition of the structure of the beak otherwise an awful lot of food would be spilt! “I agree it does look a bit like fighting, but in REAL fighting, feet and claws are used as well as much wing beating. In these pictures, the feet of both birds are not being raised in anger at all, and neither is the female thrashing her wings around. The apparent vigour being displayed by the male’s wing flapping is, I suspect, a combination of his trying to maintain balance in conjunction with the neck muscle spasms associated with the quite violent regurgitation process, and the female’s receiving of the food.

“So having achieved the objective of being fed, the female returns into the hole to carry on brooding, and the male flies away probably to preen and clean up or feed again ready for the next feeding session.

“Now where does (the other) male fits in? Probably, quite simply, not at all! Many parrot species loosely associate together all their lives and often breed quite closely together in fairly sociable communities. Most parrot species pair for life, so neither the brooding female nor husband male… would feel unduly threatened by the close proximity of another bird, and because they do not hold territories (other than the nest site itself), there is no need to expend energy chasing off a nearby bird. (The other) male… may be unmated and is just “hanging around”. He could even be an offspring from a previous year of the pair in question and so is “trusted” not to make a nuisance of himself. He will be ok as long as he doesn’t try to actually enter the nest hole – you might then witness a REAL spat!

“Nice work and a good document in pictures here, Jason. I hope this all makes sense, and I would be interested to hear of any other theories.” 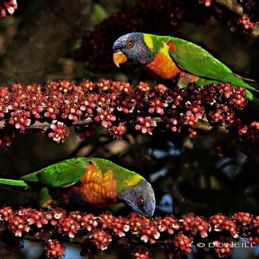 “The red, iron bird engaged its landing gears, sending her wheelie feet to hang. Her...