Peng Hui’s a.k.a. philus images of a pair of Olive-backed Sunbirds (Cinnyris jugularis) feeding their chicks at the nest were made in May 2009. The close-up studies bring out a number of details of the chicks and adults that we normally do not see. The female’s presence at the nest with food excites both chicks (above left). The adult inserts the food deep into the oral cavity of the chick, putting the entire length of the bill into what appears to be a bottomless pit between the two eyes (above right). Note the pinkish flaps between the upper and lower mandibles. These are the swollen flanges that should be obvious when viewed from the front.

The adults have short, slender, slightly decurved and sharply pointed bills (above, below). The length of the bill equals about that of the head. The oval nostril at the end of the bill can be distinctly seen (below). What is not obvious is that it is sited in a groove and covered by a flap, to keep out pollen as the birds probe deeply into flowers to harvest the nectar. Note the short tarsus that ends in strong toes with sharp claws. The adult lands on the nest with each foot firmly attached to either side of the nest entrance. The tail is obviously acting as a sort of stabiliser (below). In the above image, the male has what looks like a spider in its bill. He is about to feed one of the two chicks in the nest that has its bill widely agape. The eyes of the chick are widely opened – they were probably closed at hatching. Natal downs, those soft downy feathers that cover young chicks at hatching, are not apparent here. Whether these are absent or are sparse is not known. Pin feathers are obvious on the supper surface of the neck, with their vanes yet to unfold. These will develop into the first true contour feathers, that will form the juvenal plumage. Check out an earlier posting on feather development HERE.

On the undersurface of the neck where the skin is still exposed can be seen distinct feather tracts – where the pin feathers will develop along distinct lines. Different species have different feather tract patterns 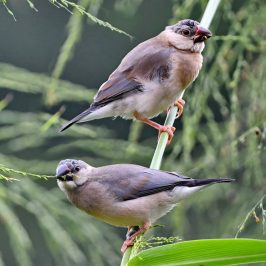 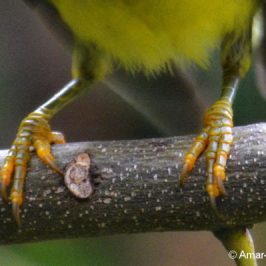