During the pre-roosting period of 1600-1830 hours, the hornbills were vocalising loudly, preening, feeding and hopping from branch to branch. In addition, pairs of the same sex were seen locking bills, as in the two males in the above image by Sudhir Shivaram. However, pairs of different sexes touched bills gently. Such behaviour has also been reported by Reddy (1988). 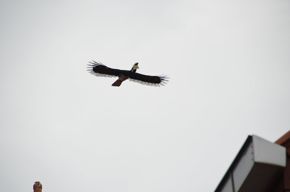