The Red-legged Crake (Rallina fasciata) that was picked up by Steven Chong and handed over to Angie Ng and Joe Lim on 16th April 2009 has a happy ending.

Angie placed the crake in a cage, “it ignored all food and water, but managed to stand upright and slept through the night standing. It seemed tired and just wanted to close its eyes.” The next morning it appeared stronger, struggling when Angie tried to handle it. The bird was then given to Joe Lim to nurse it.

The bird was dazed the whole of the 18th. Outside of the cage it remained still in an upright position, sometimes with head hanging down and the right eye closed, the left slightly opened. Joe gently stroked its head and fed it some mealworms. It was also fed with glucose solution, Inside the cage the bird was able to perch on a branch and walk about, although it preferred to stand in the container of water.

Early the next morning (19th April), it managed to squeeze out of the cage and was perching by the window still of Joe’s 20th level apartment. It was returned to its cage before it flew off. Again it escaped and had to be transferred to a smaller cage where it became active and had both its eyes open. This was taken as a good sign and it was decided to release it.

It was taken to where it was found, prodded out of the cage and it immediately flew into the trees beyond. 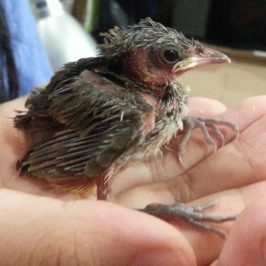 The account of the rescue of a Yellow-vented Bulbul (Pycnonotus goiavier) chick posted in mid-August... 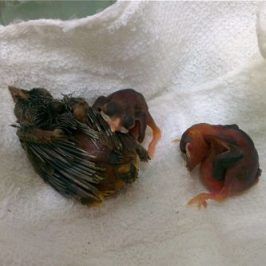