A GPS device weighing less than 5% of the bird’s weight was attached to a male Oriental Pied Hornbill (Anthracoceros albirostris) during the period when his mate was brooding two chicks inside the artificial nesting box in Pulau Ubin, Singapore. The male hornbill was tracked for four days in April 2008.

During this period his flight pattern, flight speed, total area covered as well as his interaction with the environment was monitored. The date were transmitted to a computer and stored for future analysis.

All these information would be extremely useful when conservation strategies are being planned.

Image of the Oriental Pied Hornbill in flight by Chan Yoke Meng. 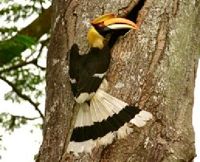 Ben drew my attention to the 2004 special issue of the journal, Bird Conservation International....