Based on three nesting cycles of the Oriental Pied Hornbill (Anthracoceros albirostris) that were video-monitored at Singapore’s offshore island of Pulau Ubin, we give you details of the various stages.

One of the three nesting cycles started in December 2005, the other in January 2007 and the third in January 2008. The first and third cycles had complete data but not the second, where fledging details were not recorded due to technical problems.

1. The female hornbill entered the nesting cavity and completed sealing herself within 5-9 days.

2. Once sealed inside the chamber, she proceeded to lay her eggs 4-6 days later.

4. Each egg was hatched after an incubation period of 27-28 days, except in one instance where the egg hatched after 25 days giving a dead chick.

5. The female broke out of her nest after 86 and 94 days from nest entry and in the two cycles with complete data.

7. The youngest chick may be killed by the female and fed to the surviving chicks or the female may eat the chick up herself. In the case of the chick that hatched dead, the female swallowed it. 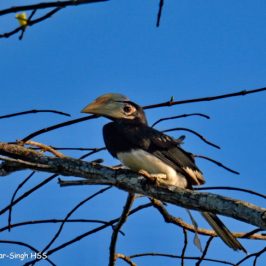