“On March 9th, Pei Xin and I were conducting a survey at Seletar Camp. As we were moving through a wooded area, we flushed an adult, female Large-tailed Nightjar (Caprimulgus macrurus) from the ground.

“It flew in a somewhat erratic manner and descended on a nearby log. Here, it performed a most interesting act of constantly dropping each wing in turn, occasionally both at the same time.

“I recognised this behaviour as a distraction technique used by many birds to draw predators away from a nest or fledglings. Carefully looking around, I spotted two eggs on the ground nearby. I took a couple of photos of the eggs and we quickly left the area, so as to allow the adult to return to her brooding. (Many a nest is abandoned because the observer hangs around for far too long, often trying to get all the photos that they want.)

“What is interesting with this observation is that the nightjar used a double winged distraction technique. Most birds that I have previously observed performing this, used one wing or the other. This is referred to as the “broken wing” technique and attracts the would-be predator to go after the “injured” bird instead of the eggs or chicks. When the predator draws close, the parent bird would then fly a short distance further. This is repeated until the enemy is far enough away from the original target.

“Waders are particularly renowned for this technique and I have watched both the Malaysian Plover (Charadrius peronii) and the Red-wattled Lapwing (Vanellus indicus), both local residents waders, utilise this.” 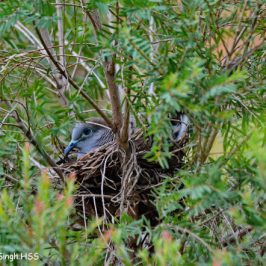 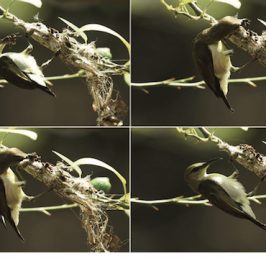