“The sub-adult Black-backed Kingfisher (Ceyx erithaca) that frequents one of the Central Reserves boardwalk trails isn’t the only bird of interest in the area (above left). A little further down, the trail forms a hairpin that encircles a streamlet which flows into the reservoir. There, another black-backed kingfisher is known to appear, but at later hours and only for a brief period. With another photographer, I saw it perching on a branch above the water and taking regular dips into the water before returning to the perch to shake off the droplets (above right). It did not feed and after the bath, disappeared as quickly as it had turned up. “Earlier, a small group of Olive-winged Bulbul (Pycnonotus plumosus) (above left) and Short-tailed Babblers (Malacocincla malaccensis) (above right) were having their bath at the streamlet when a crake, likely to be the Slaty-legged (Rallina fasciata), poked around by the vegetation on the slope below the boardwalk. A larger body about the size of the small dog could also be heard and seen moving through the forest, which was probably the mousedeer that some visitors had regularly sighted in the week before. And in the undergrowth around the streamlet, there were 3-4 small brown birds moving about close to the ground. It’s unclear though if they were the same species as one which wandered close enough to the boardwalk for a quick snapshot. I thought it some warbler and Albert Low and Yong Ding Li suspect that it’s a Pale-legged Leaf-warbler (Phylloscopus tenellipes), an unconfirmed vagrant. It seems such ‘watering holes’ offer excellent spots to catch birds and other animals in their daily routine before the night.” 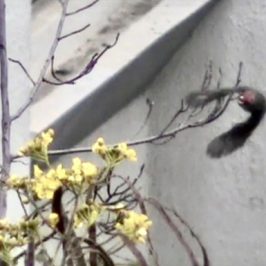 Dear Friends, I just took part in the Singapore bird race over the week-end with...