“The building of the Olive-backed Sunbird (Cinnyris jugularis) nest was started some weeks prior to Chinese New Year (26th January 2009) along the balcony of Esther’s HDB apartment which is on a high floor (above left). The nest building left messy bits of twigs and other materials littering the balcony.

“Once completed, the nest appeared to have been abandoned for about a week, with only very occasional checks by the pair of sunbirds. Then on 25th January, the birds returned and the female nested inside at night (male adult inspecting nest: above middle).

“Two eggs were laid the following week, around 1st to 4th February. The eggs were grey with dark spots. They hatched on 8th February and the two little chicks started to have their feathers developing bit by bit each day. They also stuck their heads out when either one of their parents approached with food, mainly caterpillars, insects and spiders (bottom).

“The mummy sunbird was more careful when she approached the nest. She usually looked around for 1-3 minutes, making sure no predators were tailing her. She usually took up two positions, moving from one to the other, nearer and nearer before she flew to the nest (above right, female adult feeding chick). On the other hand the daddy sunbird at most times would just charge in to the nest and fed the two chicks (below male adult feeding chicks). At night, mummy sunbird would stay in the nest to keep the two chicks warm. Latest by 7pm she would arrive and stay till dawn. “The chicks fledged on the morning of 22nd February, accompanied by lots of noise, with the parents flying around encouraging the little ones to fly off. Around 6pm both the parents returned to have a final look. Then they left…

“Although sad to see the birds go, Esther hopes that they would come back for a visit. This is a happy ending for this pair of nesting sunbirds” and two more chicks have fledged to fly around our neighbourhood.

The montage below shows the different foods the adult brought to feed the chicks. Story by Esther Chang, Images by Micky Lim who did not used flash so as not to disturb the nesting birds. The nest with the male adult was taken on 28th January, around 10am to noon, while the feeding shots were taken on 16th February. 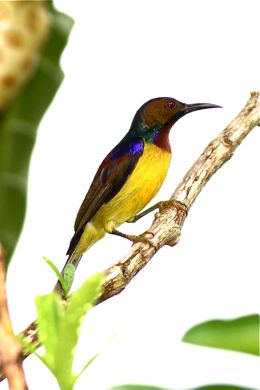 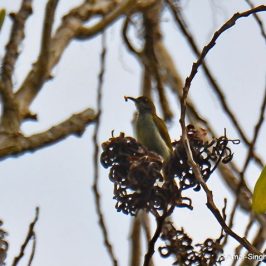 “Some of the interesting bird behaviour observed has poor documented images due to lighting and...