This is Kennie Pan’s sad experience with a pair of nesting Olive Backed Sunbirds (Cinnyris jugularis): The female Olive Backed Sunbird was seen building her nest around mid-January 2009 (above). When finished, she was not seen for about five to seven days. Then she returned and laid an egg on 2nd February. The female adult was always at the nest at night. Then ten days later the egg hatched. Both the adults helped in feeding the chick as they flew to and from the nest the entire day to feed the chick.

The image below (left) shows the female adult in the nest with the nictitating membrane covering the eye, the image on the right shows the eye without the membrane. Unfortunately some children noticed the nest and destroyed it. The damaged nest was on the ground with the chick thrown out. Kennie found the chick, put it back into the damaged nest but the adults were nowhere in sight. After a long wait and with no sign of the adults returning, he brought it home to care for it.

For four and a half days he fed the chick but then it suddenly died. The chick was naked and its eyes were still closed, but there were signs that they were about to open. Sunbird chicks are said to open their eyes about five days after hatching. The one day chick (above left) is naked and with closed, bulging black eyes. Note the extended abdomen with the viscera and almost empty yolk sac seen through the thin skin. On both sides of the developing bill are the prominent swollen flanges. When the chick gapes to beg for food, the coloured flanges act as “food targets” for the parent bird. The side view (above right) shows the swollen black eye. The black strips on the developing wing are the feather tracts.

The dead chick is now with the Raffles Museum of Biodiversity Research, National University of Singapore.

All images by Kennie Pan. 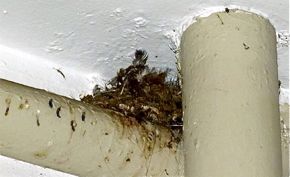 “In early September 2010, I posted my observations of two nesting of a pair of...