“I was driving my car straight into a parking lot in my condo near Lower Peirce Reservoir on 2 Nov 2008 in the evening, when I saw a bird hopping like a magpie robin in front of my windscreen at the grass patch. The bird briefly disappeared from sight, being blocked by the front part of my car. I decided not to get down from the car as it may startle the bird into flight. I wound down the door windscreen and folded the external rear view mirror, waiting for the bird to reappear. I was not to be disappointed. The bird showed up on the correct side of my car after a short while and I took a series of photos using only one hand to control the zoom and shutter… This is the first time I have come across such bird.”

Huang JH identified the bird as a White-rumped Shama (Copsychus malabaricus). Our bird specialist R Subaraj further confirmed the identification, adding, “Given the location of your sighting, it may very well be an escapee from someone’s cage (although the plumage is rather clean).”

Added Chong Hong: “The bird stayed in the same spot for perhaps half a minute or so. It didn’t fly away when I stuck out my camera from the car window, unlike other birds such as Zebra Dove (Geopelia striata) or White-breasted Waterhen (Amaurornis phoenicurus ) which I encountered.

“The condo is Faber Garden. It has big open space, plenty of matured trees, bushes and hedges. Many residents have plants in their own gardens resulting in a place conducive as habitat to the smaller birds such as sunbirds.

“We have other resident birds in and around the condo, like White-throated Kingfisher (Halcyon smyrnensis), (known to have stolen fishes from fish tanks kept in nearby landed properties), bee eaters and white breasted waterhen mentioned above.” 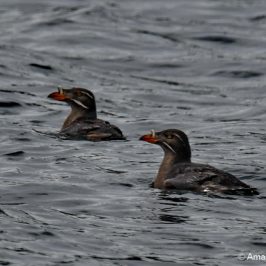