As is typical, the nest is a cup-shaped structure placed on a horizontal branch using spiders’ silk for attachment.

The chicks do not appear to be ready to fledge as the wing feathers have yet to be fully emerged from their sheaths (lower chick). The white basal feather quills are conspicuous, continuing as black vanes enclosed tightly within the feather sheaths. Only the extreme tips, seen as faint brownish-yellow, are the emerging feather tips.

Exactly what the adult is feeding the chick is not clear. Can it be plant matter? A piece of fungus, perhaps? However, the iora takes arthropods mainly, and although rumoured to also take fruits, this has still to be confirmed. 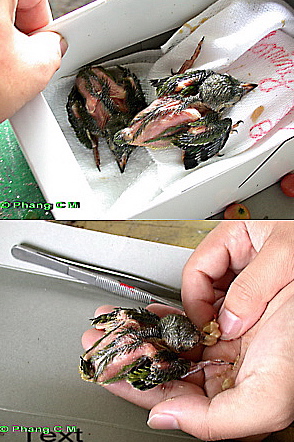